Rippln: Is It A Scam?

I recently saw an invitation to join Rippln (pronounced ripple-in) in an on-line group I belong to. It said:

"It's already growing at the speed of Facebook, Twitter and Pinterest! You have to see the concept to understand why. But once you get it, you'll see this could change your life forever."

"Oh really!" I thought, "I better check this out".

So I looked at some of their videos on Youtube. They are nice to watch and very well produced. 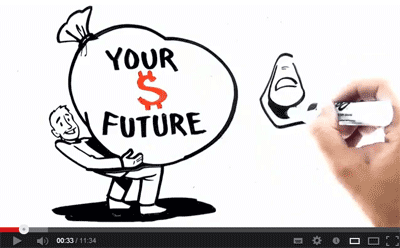 Their claim is that you can make money using their platform by sharing links to apps, products, services and websites.

They make grandiose claims: it will be "bigger than email" and it will "change how on-line and off-line commerce is done".

So how does it work?

Then when you recommend a product or service and someone on your ripple purchases it you get a cut.

Hmmm, this is suddenly sounding like a pyramid scheme.

OK, lets do some "due diligence"

The main man behind Rippln is Brian Underwood. Lets see what comes up when we google his name.

Is a pattern emerging here?

Well it seems he was involved with similar companies:

iZigg: An American and Canadian company that sells mobile text messaging for business and recruits agents to sell the product and recruit other agents. The agents have to pay a monthly fee for the privilege of sharing in the profits.

Burnlounge: An online music selling business where users had to pay to be involved in the company. It was investigated by the American Federal Trade Commission who:

"ordered the operators and top promoters of a deceptive pyramid scheme to pay a total of $17 million to refund consumers who were burned by the scam. The court order permanently halts marketing methods used by the operation known as BurnLounge, which lured more than 56,000 consumers from around the country by masquerading as a legitimate multi-level marketing program and making misleading claims about earnings to be made."

LocalAdlink: A business based on selling paid adverts and recruiting other people to sell paid ads. The sales reps are charged a monthly fee.

They follow the same pattern, make the same claims and use the same tactics.

If you route around the forums and blogs related to these companies you see the same things occurring. People suggesting it's a pyramid scheme then people responding saying it isn't and they are making a good living from it. They defend it vigorously and with multiple posts. Mysteriously they are often brand new members to the forum, or have dubious credentials. Then you get other people saying they joined up, paid their money recruited other agents/players/reps and didn't receive any support or revenue; the defenders come back and say that the people complaining only have themselves to blame, and didn't work hard enough or just "didn't get it".

These aren't genuine businesses they make their money by having their agents/players/reps pay them and selling them "coaching" and motivational material. The only people that make money are the founders.

Rippln looks the same to me. It's using the same language as these other scams. There's an initial sign up phase with loads of hype. Extravagant promises of earnings are made. The product is described in extravagant ways:

it will "transcend the marketplace"

Very little is said about the platform except you will be able to buy services, products and apps.

Brian Underwood the "thought leader" in one of his webinars says:

"Everyone watching this is a visionary. Seeing what isn't as if it were and then making it that way. That's the secret to creating a compelling vision, not only in your life but using this as a platform to create it!"

If you follow the programme you could become very rich, it's open to anyone, the visionaries that get it.

It's like a cult that uses a mix of motivational speech, marketing spiel, supposed technological innovation, slick advertising, and clever sales techniques to rip off thousands of gullible people. It has all the characteristics of a cult, a charismatic leader, secret knowledge, the promise of something wonderful, the opportunity to be one of the chosen few.

Of course I could be wrong. The "viral" app has not undergone its "global" release yet. It could be the next best thing since sliced bread, but do you know what, I don't think so.

They've been promising the release of the app for a while now and it's not happened. On the 19 April 2013 they said "in the next few days it will be rolled out". It's now 9 July, nothing.